Scottish Family Crest Rings – Six thousand years ago men started wearing rings of different kinds as ornaments and to display their position. Romans men and women popularized the wearing of rings. Egyptians had scabbard motif on their rings. The signet ring was worn by anyone who held positions of power.

A Silver or Gold Family Crest Signet Ring indicates a position of power and authority and was used to demonstrate a symbolic power vested in the wearer of the ring. The finest family crest rings are engraved deeply and customs made for use in wax seals. They are never cast in bulk or engraved superficially. The ancestry of the forefathers who had received a coat of arms from a king is engraved in the family crest displayed in the ring engraving.

Family Crest Rings in Gold is a unique gift idea and bears the clan symbol or surname. It displays the Scottish genealogy with the clan name or symbol. Gold crest rings are solidly crafted in various colors of karat gold and usually display a belt and buckle pattern with the clan motto inscribed on the top of the ring in a raised relief.

The silver rings are having heavy solid designs with the engraving of the family crest on the top. Modern day technology has enabled the creation of accurate deep cut images on the surface of the ring making them cheaper to make than the traditional hand crafted rings. Ring surfaces have average dimensions of 20mm by 18mm.  Crest Rings contain the full color of a family crest and have a Bezel set style with antique lines which are engraved on the sides.

Different kinds of Scottish Family Crest Jewelry are used like necklaces, pendants, brooches and rings, cuff links, which can be made from gold, pewter or silver which when handcrafted in Scotland are valuable heirlooms in the family. Nowadays these accessories are also worn with casual wear or during work and also at school.  Rings are part of the heritage of Scotland.

Burkes General Armory lists out recipients of coat of arms which might have been through the female line which will carry an entirely different surname. Sometimes the grandmother’s side may have a grant of arms by which the present generation is linked to aristocracy. 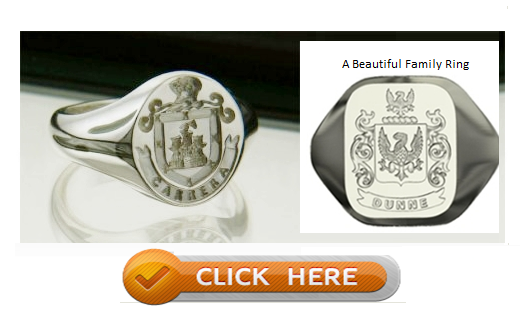